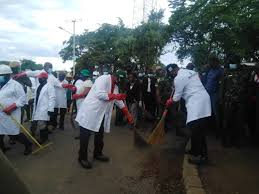 The company says the initiative is not running smoothly as projected when it was being launched arguing that community members are no longer implementing it in their respective areas.

President Lazarus Chakwera launched the initiative on November 11, 2020 at Chinsapo in the capital Lilongwe aimed at ensuring hygiene in cities and residential areas.

But ApDev Inc says the initiative’s challenge is being fueled by lack of knowledge on how best they can succeed it without being pushed by authorities and demand for payment-like it has been the case with other initiatives such as MASAF-after cleaning a particular surrounding.

The company adds that lack of adequate information on goodness of cleaning the surroundings including markets and other public places and political interference of which active political actors have recently emerged to be ring leaders of the initiative, making community members think it is for political gains.

“These are some of the reasons that are killing the very good initiative that can turn our cities and
markets and other public places-everywhere-into clean ones. As part of our corporate social responsibilities, ApDev Inc. has responsibility of working hand in hand with government to revamp the pace that was taken moment this initiative was starting”, read part of the statement signed by ApDev Inc’s Chief Executive Officer Sylvester Kelvin Tchuma.

Tchuma has however asked Chakwera’s Tonse government to initiate the cleanup campaign to schools as a way to motivate community members.

The company observes that initiation of the cleanup campaign to schools including primary, secondary and tertiary levels by encouraging students to be cleaning their surrounding every once a month will motivate community members to Join the act.

The company also asked the government to re-introduce the campaign’s educative messages because there is lack of adequate information on goodness of cleaning the surroundings including markets and other public places.

Tchuma has also appealed to the government to introduce complete independent entity comprising of people at all levels as people demand for payment after cleaning a particular surrounding.

The company has however asked the stakeholders including the government to work hand in hand before the situation goes out of hand.

But Forestry and Natural Resources Minister Nancy Tembo last month told The Maravi Post that the initiative its for everyone that needed to be advanced not only by government.