The lies that continue to dog Tinubu are not new. The lies have been part of his political diary since he joined politics. The authenticity of his certificates, the schools and university he attended, his parental background, his real names, etc., are hanging on his neck like the sword of Damocles. 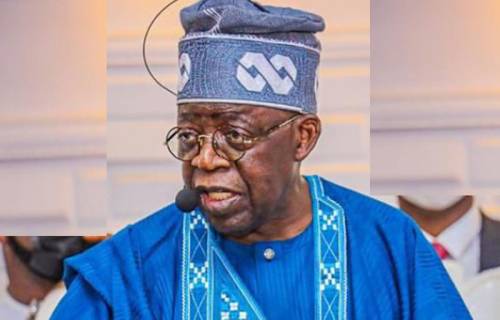 “The issue of certificates is not the problem per se. It is about his character. How can Nigerians (thank God I’m a Yoruba, citizen of Yoruba Nation) elect a president they don’t know his names, his age, and names of his parents? How can they elect a president they are not sure which schools and university he attended? Tinubu cannot name one of his school mates or friends in primary, secondary schools and course mates at the university.

Beyond this cathedral of lies, the issue of his health is of grave concern. His age and medical condition are against him. His supporters always foolishly argue that US President Joseph Biden is in his 70s. True. Does Biden exhibit deteriorating health problems like Tinubu? No. Does Biden wear diapers? Of course not! Are Biden speeches laced with goofs like Tinubu’s?  Absolutely not. There’s no comparison between oranges and apples.

Whenever Tinubu speaks in public, he always goofed. A few examples will suffice: He said PVC has an expiration date. People are tweeting on WhatsApp. Fifty million youths will be recruited and fed with cassava in the morning, agbado (corn) in the afternoon, and garri in the night. Malami switched off phone lines on the national grid. I bet, Tinubu cannot even count 1-100 without skipping numbers. He can’t hold or handle any object without his hands shaking. He can’t leave home without diapers. All these are symptoms of old age. No one can fault him for these and other myriad health issues.

Tinubu believes 2023 belongs to him because he brought General Muhammadu Buhari to power. Nothing belongs to him. The presidency is not a compensatory gift for him. His die-hard noisy, brainless Jagabandits said he made Lagos a better city and Lagos State a state of pride. How? How many schools, hospitals, and roads did he build? How many jobs were created by him? Instead, he impoverished Lagosians. He made Lagos a mega slum metropolis. Tinubu, where are the cows? Where are the youths who were killed at Lekki Toll Gate? Tinubu, where were you when Yorubas were being killed, robbed, raped, and kidnapped in Igangan and other Yoruba states?

The history of the combined 23 years of Tinubu and his handpicked governors of Lagos State is a history of avarice. History of land seizure, confiscation of properties, monopoly of government contracts, recruitment, training, and retention of thugs, unrestricted looting of the state treasury, and other avaricious practices. Tinubu, iwo ko lo kan! Tinubu it is not your turn!

Like it? Share it!
Racers aim to be a cut above the rest at annual lawnmower championships < Previous
Congo and Rwanda to meet for talks amid tensions over rebels Next >
Latest News From Malawi
Headlines From: The Maravi Post