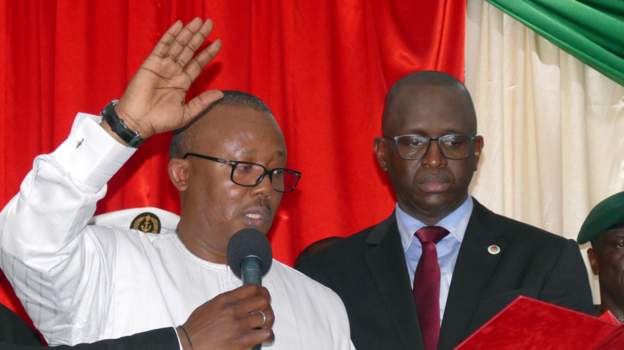 
The African Union and the West African regional bloc, ECOWAS have all condemned what they called an attempted coup in Guinea-Bissau.

Gunfire was heard near a ministerial building in Guinea-Bissau where President Umaro Sissoco Embaló and Prime Minister Nuno Gomes Nabiam were having a meeting on Tuesday.

At least one police officer was killed in the gunfire in the capital Bissau. The firing has now now subsided.

Military vehicles laden with troops have been driving through the streets of the capital to restore order.

The military and police had gone to the scene where the armed men were firing, following which a police officer was shot.

Guinea-Bissau’s Foreign Minister Suzi Barboza told the BBC that she is currently outside the country and awaits news about the president.

Ecowas in a statement said it will hold “the military responsible for the wellbeing of President Umaro Sissoco Embaló and members of his government”.

#Ecowas issues statement on happenings in #Guinea-Bissau. It has condemned the coup attempt and says it holds the military responsible for the President. pic.twitter.com/1Leor6Cq0D


The African Union followed with a statement expressing regret at the development and asked the soldiers to return to their barracks.

The @_AfricanUnion Commission head, Moussa Faki Mahamat has said he is following with deep concern the situation in Guinea Bissau characterized by the attempted #coup against the Government of the country. He calls on the soldiers to return to their barracks. #GuineaBissau pic.twitter.com/AA2KE1Wxvm

Nine coups or attempted coups since independence from Portugal in 1974 have taken place in Guinea-Bissau.

Like it? Share it!
UN demining body explodes landmines in South Sudan < Previous
Guinea-Bissau: Heavy gunfire at presidential meeting compound Next >
Latest News From Malawi
Headlines From: The Maravi Post